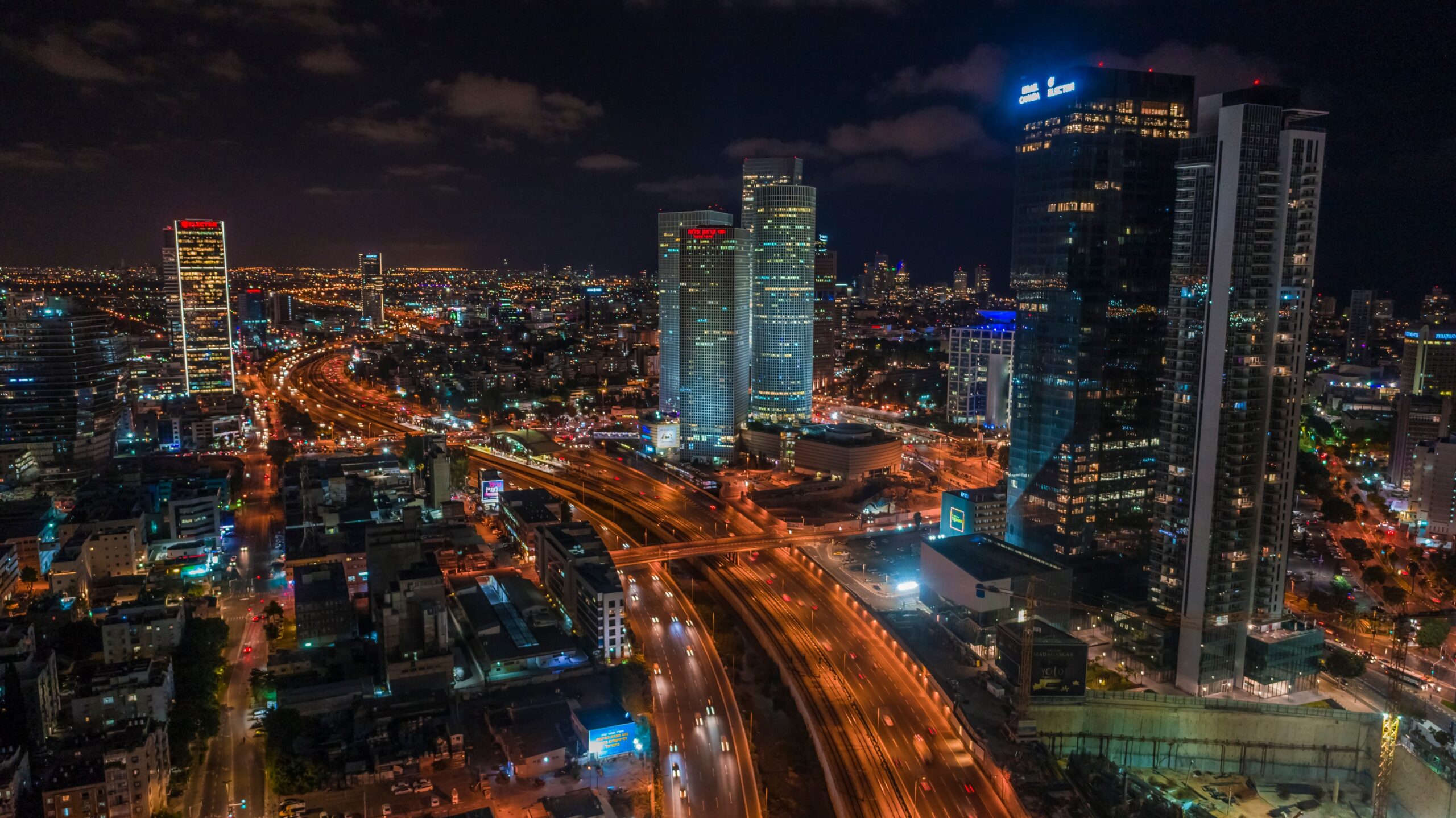 It is highly likely that the microchip that runs your computer (Intel), the public transport app that you use to go to work (Moovit), your smartphone’s satellite navigation system (Waze), and the software that manages your self-driving car (Mobileye) were all at least partially developed in the laboratories of an Israeli tech company.

Israel – which was established just over seventy years ago, is not much bigger than Sicily, and lacks natural resources and raw materials – has managed in a mere few decades to become one of the top technological powerhouses alongside California’s Silicon Valley, the United Kingdom and Japan.

Challenges due to Covid-19

Covid-19 has put the world’s economies to the test. And while Israel has been affected by the pandemic, it has proved capable of rising to the challenge. Nine months in to the global pandemic, the Israeli tech sector is untouched, retaining its status as a magnet for foreign high-tech investors.

Israelis have also seen Covid-19 as an opportunity, and today at least 70 Israeli startups and companies are developing technologies to combat the virus. [3] 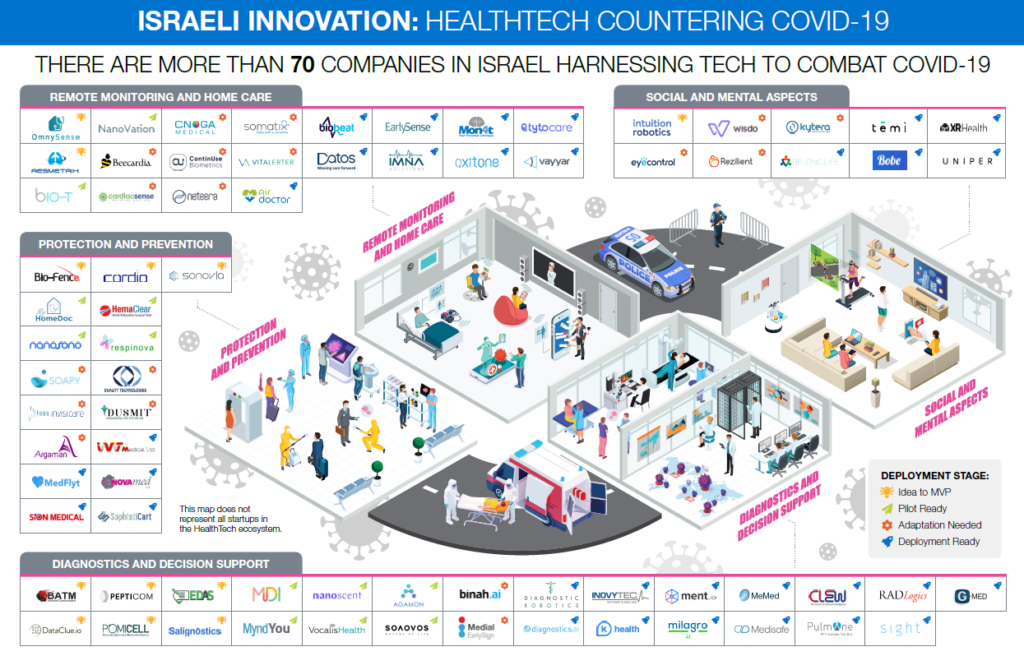 Many experts had feared that the restrictions that governments imposed to keep the pandemic in check would create hurdles and delays in investment processes. But investors have continued to invest, even coining the term ‘born in the Zoom.’ A June 2020 OMERS Ventures survey of 150 VCs found that 69% were willing to enter into deals remotely and that 49% had already done so. And this is for a very simple reason: due to the highly limited domestic market, all Israeli startups hit the ground running as international companies. As a result, they often ­have multiple offices, and remote working is therefore something they have become accustomed to over time. This is one of the many competitive advantages of this ecosystem – one that has allowed it to remain productive despite the lockdowns imposed on most sectors of the economy to curb the pandemic.

Clearly, none of this happened by chance. The ability to adapt rapidly to change – including radical change like we are currently experiencing – is typical of ecosystems that focus on innovation. This is because they always look to the future and often implement change themselves. Innovation permeates all areas of Israeli society. Even in politics, ministers, governors and mayors discuss innovation daily. And it is this tireless momentum that has made explosive growth possible and completely changed the country’s outlook.

Dan Senor’s Start-Up Nation[4] describes how the intrinsic inclination in Jewish culture to constantly question the status quo in order to improve the world around them – along with the essential need for technological and military superiority over the countries that threaten Israel’s existence – is one of the key reasons for Israel’s success.

Israel’s absence of hierarchical barriers and its society’s acceptance of failure are another two crucial factors. In Israeli society, everyone is ‘accessible’ and willing to listen. Failure is a fundamental part of professional life and is anything but a reason to be ashamed.

Israel’s very high level of education is an additional component of its success. Israel is the third most educated country in the world. Nearly half (49%) of the Israeli adult population between the ages of 25 to 64 has completed tertiary qualifications – well above the OECD average of 35% and the third highest rate of all OECD countries. [5] This is thanks to both the importance placed on education in the Jewish tradition and the country’s compulsory military service (three years for boys and two years for girls). Once youth have been recruited, they are encouraged as much as possible to pursue paths that make use of their skills and are given university-level training.

But even all of this would not suffice to become one of the main technological hubs in the world: there is a need for enormous public and private capital.

Israel ranks first in the world both in percentage of GDP invested in R&D – 4.9%[6] – and per capita expenditure. This huge amount of capital ($19 billion annually) is distributed thanks to a multitude of national, regional and academic incubators and accelerators.

In 2019, Israeli companies raised $7.9 billion,[8] approximately half of which came from abroad. This is an astounding sum considering that $694 million[9] was collected in Italy, and $36 billion in all of Europe.[10]

VCs also continue to yield excellent results, with $1.5 billion being raised for future investments in the first half of 2020.

While the pandemic has damaged industrial and economic supply chains, it has not had the same effect on the global hi-tech sector, which has instead seemed to benefit from the situation. Countries that constantly and heavily invest in research, development and training will create economies that are able to emerge more quickly and perhaps even stronger from this and any future global crisis.

Conversely, countries where innovation is still sluggish, superficial, feared or even hindered are those that risk succumbing to the effects of Covid-19. These countries must quickly embrace best practices that have been developed by more innovative and trailblazing countries such as Israel by introducing, promoting and supporting innovation processes involving all of society.

Inclusivity, sustainability and empowering women: Martina Rogato, from Luiss to the G20