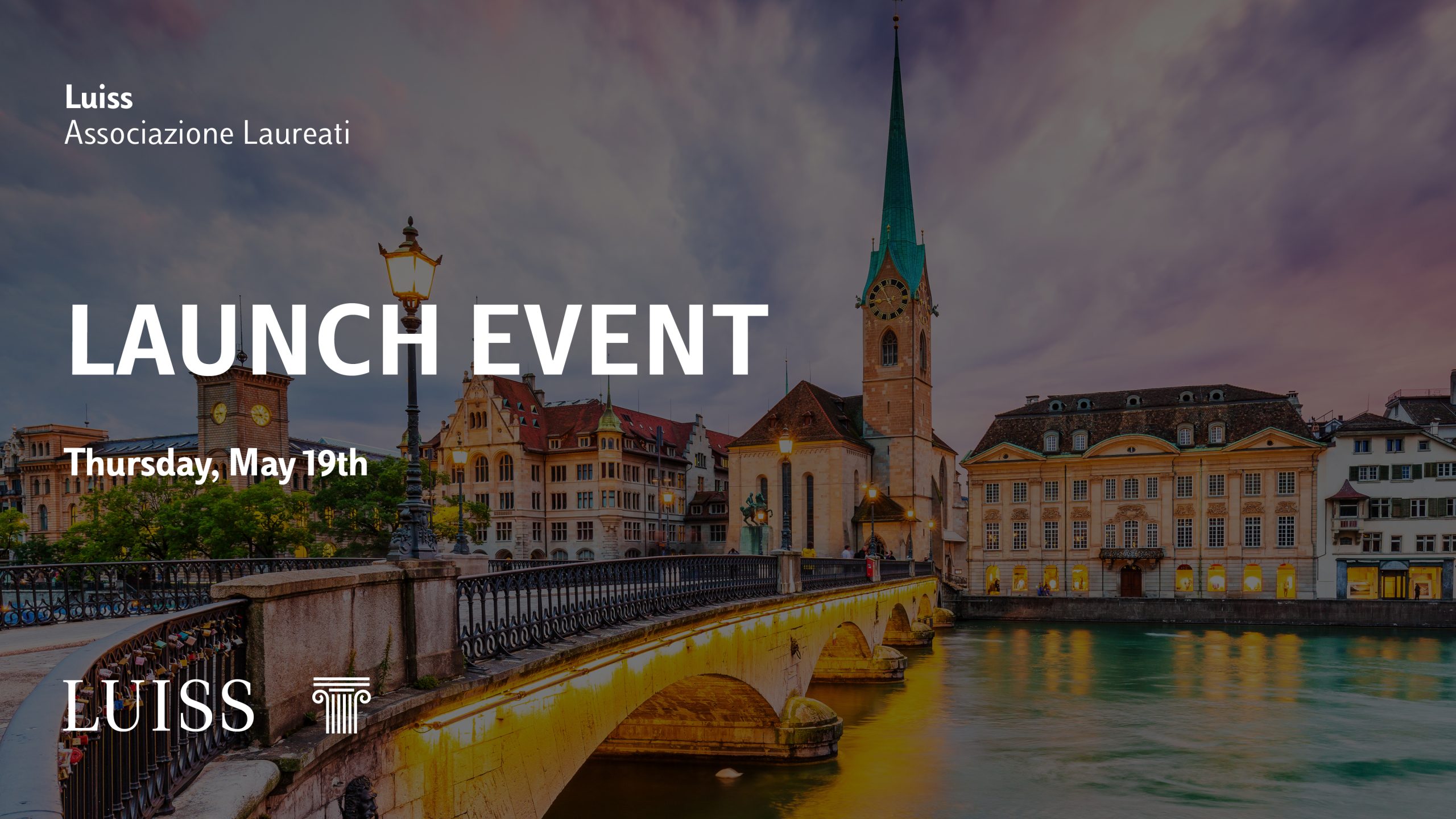 It was a successful meeting that exceeded our expectations because, with the support of the office in Rome, we managed to organize an event that had a much higher than average attendance rate. I was thrilled to return to Luiss and be surrounded by Alumni. After graduating in 1983, I lived in Milan and then in Zurich, so I lost touch with my Luiss contacts, despite it being a cohesive community. The event was held on 19 May this year and was mostly attended by very young graduates who are under 30s, full of energy, and driven. Their contacts will be invaluable to the organization of the Chapter’s upcoming events.

Our goal is to convene and re-engage with those professionals who have lived in Switzerland for many years and due to the absence of a Chapter, have lost contact with Luiss or the Alumni Association.

Many participants stayed on after the event – we see this is a positive sign that people are interested in connecting and exchanging ideas. Time is a valuable resource and networking activities that do not follow-up run the risk of low or poor engagement. We also wish to deliver activities centered around topics of common interest to attract a wider audience while creating a lighthearted tone. We aim to strike the balance.

A Chapter abroad also serves to support the integration of Luiss graduates in the new country, and the Swiss Chapter has certainly started off on the right foot. We plan to organize meetings also in other cities such as Geneva, the hub of international institutions, or Bern and Lausanne. We seek to cover as many cities as possible, and we are also thinking of convening speakers. We are currently working with some Alumni in Geneva for a tentative event in the fall, and one in Zurich on the topic of sustainability. We want to make it an insightful and lively Chapter.

Simona, you have held senior positions in your career both at the national and international level. What does the appointment as the Leader of the Switzerland Chapter leader represent for you?

I was pleasantly surprised and honored, and I gladly accepted the offer. I would really like to support the community of Italians and Luiss graduates in Switzerland because I am convinced that they can give a lot and do a lot. Graduates have so much to give at the individual level, nevertheless, having a supportive community is also important.

Developing this Chapter is important to me because I would like to create a structured network or system and then one day, leave it as a legacy. I did something similar in Italy with Valore D, where I was Founder and first-time President and in Switzerland with the Swiss association, Advance. I am proud of this achievement because we all have content, passion, and expertise to share. Pulling these assets together will generate positive impact as an act of generosity.

We followed your speech at the recent presentation of the Luiss Gender Equality Plan. Do you see any progress in terms of closing the gender gap, thanks to legislation adopted at the European level and in many countries?

I see positive progress; however, it is very slow and frustrating at times. We have been talking about gender equality for years. Things are moving in the right direction, by taking two steps forward and one step back. We need to keep pushing.  I believe that greater the number of women in the workforce, the easier it will be to progress towards achieving gender equality.

Beyond that, corporate boards include a small segment of the working population. What I am most interested in is the talent pool within organizations. According to statistics, women are more unlikely to reach top positions. In Italy, only 3 percent of CEOs are female. Thirty-three percent of women are represented on corporate boards. However, there are only a few hundred female managers compared to the thousands of women who would be involved if we worked on the talent pool at all organizational levels by increasing the share of women in specialist, mid-level management, and executive positions.

In any case, I agree with the message of adopting quotas in boards, because it is also an opportunity to increase the visibility of women and their profile as “role models”. Otherwise, we run the risk of unconscious bias that leads us to think that HR and female employees who aspire to reach high-level position “will never get there”. Looking at the statistics at the global level, the countries that adopt quotas, have more women on corporate boards.

What are the most wanted jobs in Switzerland? What expanding fields might be of interest to our graduates?

Switzerland is an attractive market because the unemployment rate is very low, below 3 percent, and there is a need for resources at all levels and all sectors, from operations to white collar jobs. The financial sector is attractive to our Luiss Alumni and is also one of the most significant sectors of the country. Large auditing firms are desperate for talent.

Another very interesting area is also ESG (Environmental, Social, and Governance criteria). Skills in this sector are still scarce, or rather are being developed. Institutional investors adopt this criterion to assess companies, which in turn require resources that can measure this against returns. Measuring ESG is a most wanted skill not only for Luiss graduates in economics but also for political science and law.

How do you envision the Switzerland Chapter in five years?

We wish to have more members and I hope that the Chapter become a spokesperson not only for Luiss in Switzerland but also for the Alumni communities around the world. It is an opportunity to build insightful content and a system for knowledge and idea exchange that is recognized beyond the Chapter.